Suicide From the Other Side: A Medium’s Journey

SUICIDE FROM THE OTHER SIDE: A Medium's Journey Toward Creating A New Paradigm for Understanding, Healing, and Love

Suicide: a hidden stigma, a damnable sin, a shame or an embarrassment. That’s what “they” say. We have all been told what to think and how to feel, about suicide, for as long as any of us can remember. It’s time to rebuild your paradigm, based on love. Susan Rushing had done countless psychic readings, over the years. But, one day she gave a reading which changed the course of her life. A shaggy-headed boy, who had committed suicide, only three months before, brought information and visions that were nothing less than mind-blowing and belief shattering. After that, readings for suicide victims became a regular occurrence. Susan’s long standing patterns of belief toward suicide changed drastically. She felt she understood suicide, and how it was processed on the other side. That is, until the rainy night, in 2010, when her daughter’s father ended his own life. Two years have passed since that crazy night. Through internal searching, meditation, dozens more suicide readings, and the messages they delivered have led Susan to a new way of healing. This healing process is based on the methods used to heal on the other side. Susan shares that knowledge, as well as many of the readings and messages she has been given. She also shares information to help you re-develop your way of thinking about the religious, legal, and social ramifications of suicide and those who are left behind. 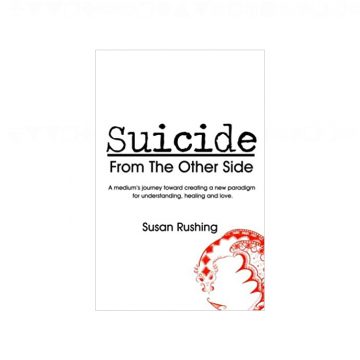 You're viewing: Suicide From the Other Side: A Medium’s Journey $14.00
Add to Cart
X