Goddesses: Mysteries of the Feminine Divine

Only 2 left in stock

Joseph Campbell brought mythology to a mass audience. His bestselling books, including The Power of Myth and The Hero with a Thousand Faces, are the rare blockbusters that are also scholarly classics.

While Campbell’s work reached wide and deep as he covered the world’s great mythological traditions, he never wrote a book on goddesses in world mythology. He did, however, have much to say on the subject. Between 1972 and 1986 he gave over twenty lectures and workshops on goddesses, exploring the figures, functions, symbols, and themes of the feminine divine, following them through their transformations across cultures and epochs.

In this provocative volume, editor Safron Rossi—a goddess studies scholar, professor of mythology, and curator of collections at Opus Archives, which holds the Joseph Campbell archival manuscript collection and personal library—collects these lectures for the first time. In them, Campbell traces the evolution of the feminine divine from one Great Goddess to many, from Neolithic Old Europe to the Renaissance. He sheds new light on classical motifs and reveals how the feminine divine symbolizes the archetypal energies of transformation, initiation, and inspiration. 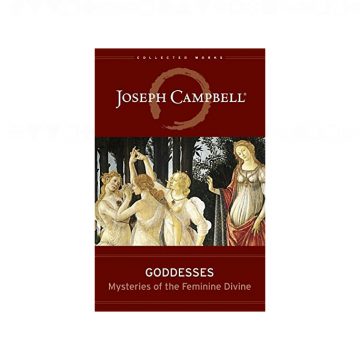 You're viewing: Goddesses: Mysteries of the Feminine Divine $24.95
Add to Cart
X